The fragment on the left is taken from Robert J Shiller, an economist at Yale University. The data comes originally from the United States census, but the actual source is not cited. This is an area that I will continue work on, because it is important, when considering the space in the home dedicated to a workshop. 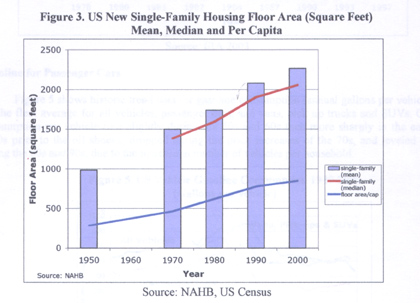 Will cover this in greater detail, but note briefly the post-WW II housing boom resulted in the "attached two-car garage", a spot that homeowners discovered was ideal for a homeworkshop.

The Phrase, "How To Plan a Home Workshop", Gets Lots of Attention

How to Plan a Home Workshop is a 56-page pamphlet issued in the 1950s by Delta Manufacturing, located in Milwaukee. (Click on the link above for a pdf online copy.) The cover includes the info, "Book No. 4541", and indicates the price: 25 cents. Inside we learn that the little book is edited by Ed. Hamilton. Replete with many photos and drawings, diagrams and other types of illustrations, this publication would definitely be a helpful source for anyone planning a home workshop in the 1950s, or even today.

In this same booklet on planning your home workshop space, the debate about potential size ranges from 7' X 10' to 9' X 12' to 15' X 20'. In the boxed section below are the table of contents and the introductory paragraphs.

The two sets are:

Both published in 1955, both sets are also marketed through local supermarkets, at $3.49 per volume. Homeworkshops -- in the basement, in the garage, even in the apartment -- are featured. My immediate reaction to such news is, basically, cynicism. How can such crude mass-marketing turn out "good"? Well, frankly, it does. The sets, for their times, each contain hundreds of well-written, (mostly) well-illustrated articles that were good then and many, today, even though dated, still have usefulness.

With such evidence, can we argue that considerable credibility exists about the validity of the claim about well-stocked home workshops in the article below?

When lack of "workshop space" for high school students in Chester, PA, became an issue in the 1950s, to accommodate the need for courses like woodworking, the city's l newspaper supported a proposed solution that would not require tax payers to fund new buildings or additions to existing buildings. Instead, the paper noted that

"the Parents' League of the Penncrest Junior and Senior High School, secondary school of the expiring Central Delaware County Joint School District (EMU becomes a union in July), believes it is possible. As the

The posting below comes from Mario Dal Fabbro's How to Build Modern Furniture , volume 1, 1957, page 155. (For an extended discussion of Dal Fabbro, click here.)

is interesting -- and believable -- because of the numbers of amateur woodworkers recorded as members of the National Homeworkshop Guild in the 1930s. Further, Phil Creden -- writing in Collier's Magazine 1953 -- declares:

But, nonetheless, from whence does Mr. Dal Fabbro's figures come? With all my research, I have yet to discover the source. Below is more from Dal Fabbro:

How Rockwell Tried to Compete With Shopsmith

Rockwell Manufacturing -- of which Delta is a subsidiary -- is closely watching ways in which the corporation can tap into the exploding house building boom. (The housing boom started in the late '40s, and continued into the '50s.)

An FHA loan could help the new owners, but -- for many -- jumping into home ownership was still both "pricey and dicey".

Keeping construction costs down was helped by having future owners agree to move into an unfinished structure, with an understanding that the home's new owners would finish the incompleted parts.

To get started, these new owners needed woodworking tools that they could afford. Buying a Unisaw was -- for the most part -- out of the question, a situation that encouraged instead several options:

either a major purchase like the Delta multiplex radial arm saw or the Dewalt radial arm saw. (The latter are domesticated versions of their industrial level cousins, detailed here) a Shopsmith, which provided an 8" circular saw, a drill press, a disk-sander, a 30-inch lathe.

To compete, Rockwell that ought that it needed a Shopsmith-like product.

(Click here for a Delta Homecraft Power Tools leaflet on "The Deltashop";

click here to see the discussion of home-ownership and woodworking.)